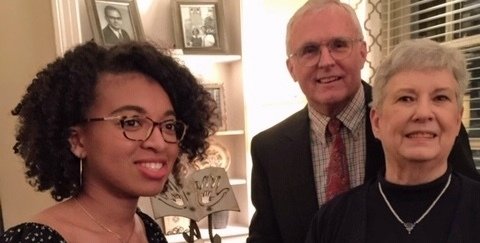 Child advocates Dick and Jan McCoy have devoted their careers to advising parents and treating children. They know the critical importance of the early years of a child’s life.

When the pediatric physicians retired after 20 years in Rock Hill, they chose to continue that commitment. One of the ways they have done that is through a donation that will create a foundation for the Early Learning Partnership of York County.

“We wanted to set good habits for parents, for them to understand how important it is for them to emphasize reading and to limit TV time,” said Dick McCoy. “When you read to your child, you’re holding your child in your lap, you’re snuggling, all the good things we want to emphasize.”

Jan McCoy, a retired pediatric neurologist who taught middle school before she attended medical school, says its important for parents to begin good habits at a young age. Reading is time for parents and children to bond, she said.

The McCoys said they wanted to establish a permanent foundation, with earnings that will provide ongoing financial support for ELP’s early literacy and education programs. The fund “will enable them to sustain the program for many years to come,” Jan McCoy said.

Sylvia Echols, who worked in the McCoys’ practice for about 15 years, providing counseling to families and children, said they have always had a great interest in the welfare of children.

“Both of them understand that a child’s very beginning is critically important,” Echols said.

Echols said: “Now the research says that the first two months are the most important time in a child’s life, in anyone’s life. A big piece of that is reading to children. It’s so much more than hearing words. It’s attachment, it’s bonding.”

Jim Vining, a former Rock Hill school board chairman and a longtime friend of the couple, said the McCoys are involved in the community and always looking for ways to give back. “They want to make a difference in people’s lives,” Vining said.

During a reception to thank the the McCoys for their donations, ELP gave the couple a metal art sculpture created by Winthrop University student and Close scholar Jewel Edwards. The sculpture shows small hands, holding a book that is supported by winding vines.

Rock Hill poet laureate Angelo Geter also read a poem, dedicated to Dick and Jan McCoy, that was commissioned by ELP. The poem, titled “Oasis,” focused on the same theme as the sculpture: planting knowledge in the oasis of young minds and waiting “for the future to grow.”

Dick McCoy said pediatrics focuses largely on preventive issues, and reading and other early literacy skills form a foundation for success in later life. He enjoyed handing out books to children during their regular office checkups.

ELP provides books to children at York County pediatric practices through a national, evidence-based program, Reach Out and Read.

“There were so many benefits to giving them a book,” he said. “It helped open the door, setting we thought a good role model for the parents to understand that this is going to be an ongoing process, and the magic that it can bring to the child, to be able to open up the child.”

Jan McCoy, who was involved with Echols in the area’s early Reach Out and Reach program, said some of the behavior problems she observed during her practice were related to children who had “too much screen time, too much being left on their own.”

Dick McCoy said limiting screen time can be “a battle for parents, and it’s even harder now. If the TV is on all day, that’s not a good thing. We saw how much TV was influencing the family, the child, and we focused on that.”

The McCoys said they are pleased that their investment in ELP’s early literacy mission can help generations of families. “We like the idea of a perpetuity type of fund,” Dick McCoy said. “We want something that is going to help now, and forever.”